Server-side Swift: How To Use Vapor 3 With MongoDB

I’m working on a side project, which is an iOS app, and it is going to communicate with a database. I had to select a tech stack for my back-end, and I chose an interesting and rare at the same time tech stack for the back-end.

I decided to give a try to server-side Swift, and I selected Vapor as a Swift back-end framework. Then, I needed a NoSQL database, and I chose MongoDB.

I couldn’t find much information on the web on how to use combine these technologies, so I decided to figure out it by myself and share some of my learnings and knowledge on this topic.

In order to work with MongoDB in Swift applications, you need a MongoDB driver for Swift. There was a couple of driver options:

I decided to go with MongoSwift because it’s an official MongoDB driver for Swift developed by mongodb.

Let’s install MongoSwift in our application.

Then, add MongoSwift to the Package.swift. Your package should look like (the highlighted line is the one you need to add):

That’s it! If there are no errors, you are set up to build some cool stuff with MongoDB and Vapor 😀👏

How To Work with MongoDB In a Vapor App

Where user is a simple data structure that contains id (integer), username (string), and password(string).

We can start with creating a data model for our server. Create a User.swift file inside the Models folder of the App and put the following structure there:

Now, let’s configure our app. Go to configure.swift and add the following code inside configure function:

The first line create a connection to MongoDB server. If you’re connecting to mongo’s default port on your localhost, you might omit passing the connection string parameter.

Next, I initialize an instance of vaporapp database. After that, I create a collection called users if it doesn’t exist. Lastly, we register our client, so we can access it later in the app.

Also, add the following line of code in the end of the file, so our MongoClient conforms to Vapor’s Service.

Configuration part of this tutorial is done ✅

The first endpoint of our server is going to be a POST request that would accept a user JSON object and insert it to the database. Add a user route inside routes.swift with the following content:

Let me walk you through the code:
1. In the first line, I register a post request for /user route, and I specify the return value of the closure (Future<HTTPStatus>). If you are not familiar with Futures, read this article.
2. It does exactly what it says: it decodes the content from the request and maps it to the closure’s return value. The user parameter in the end is the instance of the object being passed by the request.
3. client is, basically, the MongoClient we made in the configure.swift.
4. collection access the users collection from vaporapp database, and associates it with User type.
5. This is where insertion to the database happens. user instance is passed as an argument.
6. Return .ok HTTPStatus.

It’s time to test this endpoint!

First of all, make sure that the Vapor app is running: 1. vapor build 2. vapor run

I use Postman to test my APIs during the development. Here is my request to the newly created endpoint: 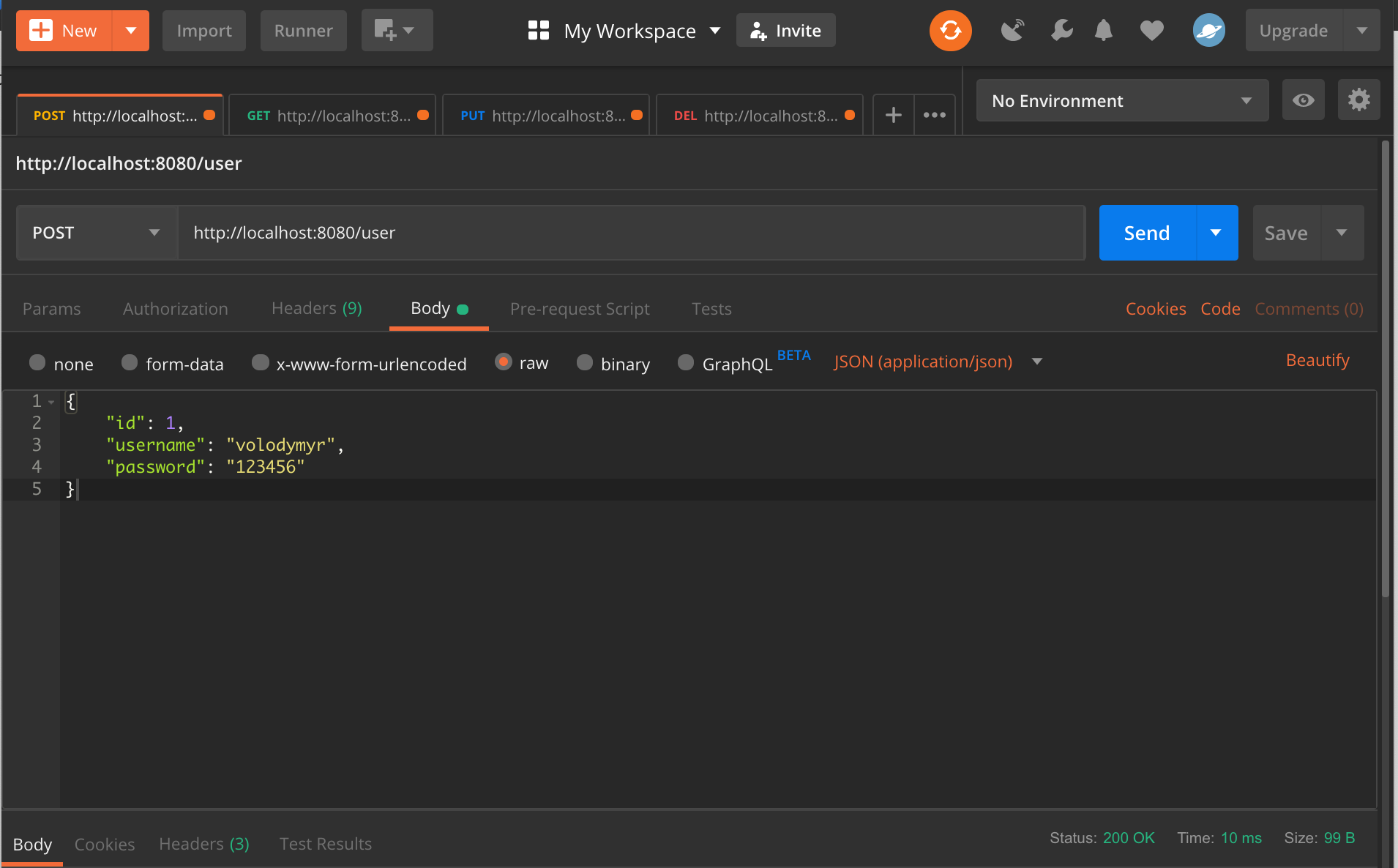 I sent a POST request with the request body (that you can see on the screenshot above). You can see the successful response with status 200 in the bottom right corner.

Now, let’s implement an endpoint for retrieving a list of usernames from our database. Let’s code a GET method /users route:

First few lines are pretty similar to what we’ve done in the first POST method (note that I use router.get instead of router.post). Next, I use a find() method of the collection instance, which returns a mongo cursor that is being used for working with documents in the database. Note, you can pass a filter query as a parameter of find() if you need to search for a specific document.

Then, I iterate documents in the cursor, and push a username property of each document into my usernames string array. Finally, I return the usernames, and let’s take a look at the output from my GET request: 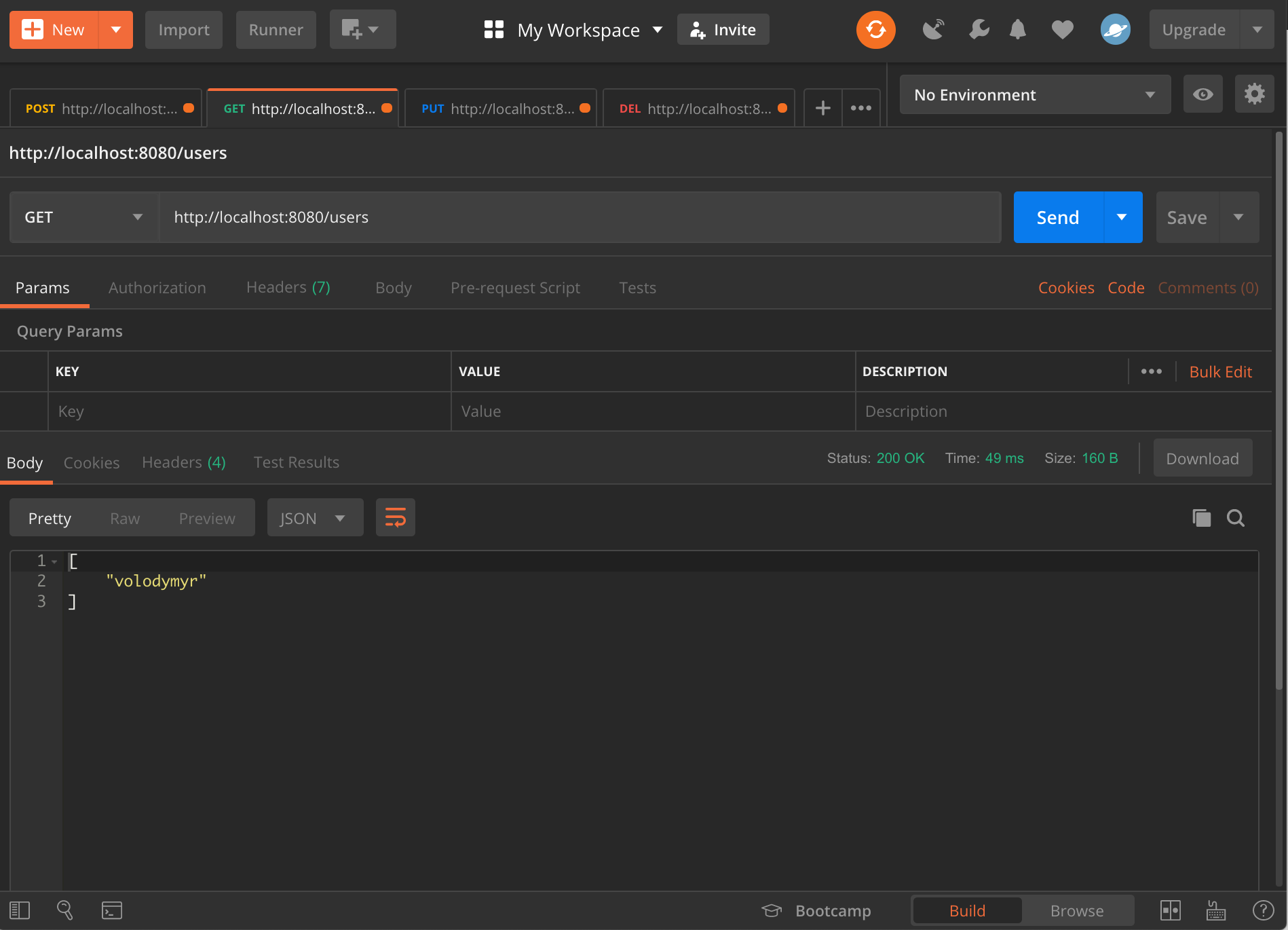 The request returned volodymyr user, which had been added earlier.

The next endpoint would be a PUT request that updates a specific user (username, password) by using id of the user. Let’s get straight to the coding:

The first part of the code is the same to what we’ve seen earlier (note that I use router.put). It decodes the body of the request and creates the client and collection variables.

Then, I create a query of MongoSwift’s Document type, which is, basically, a struct that represents the BSON document type. As you can see, the query I made will look for a user.id that we’re getting from the request body. Also, I made an updatedUser variable of the Document type, which I’m going to use in my update method call. It specifies new username and password in its definition.

After that, I simply call collection.updateOne with the filter: query and update: updatedUser arguments. This line of code will look for a user with specified id, and update the username and password of that user.

Let’s test it! I’m going to send a PUT request with the following request body: 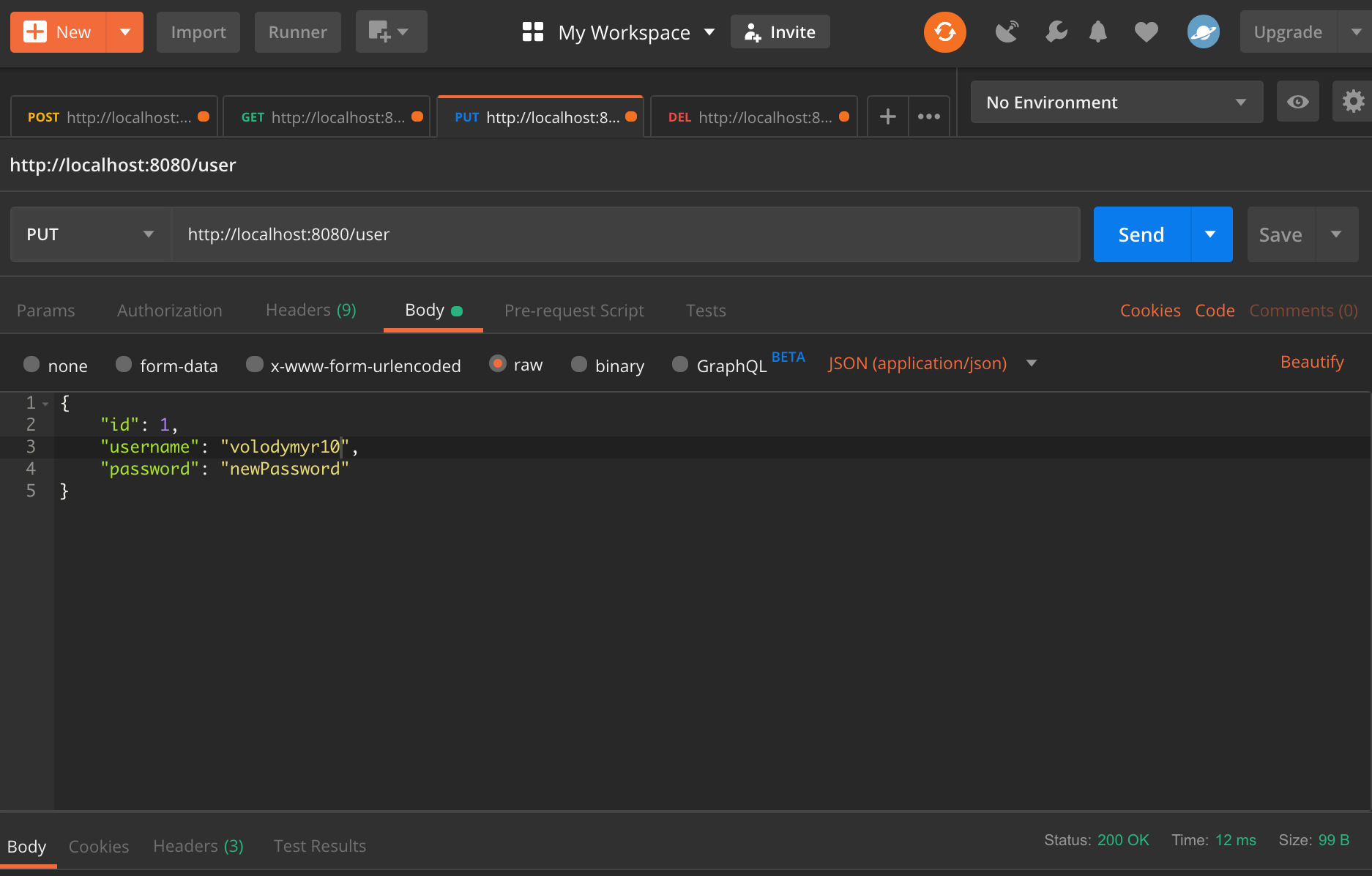 Here, I’m using an id of the user I’ve created earlier, but I’m using a new username and a new password. I got a successful response from the server (see right bottom corner) after sending this request.

Now, the updated username should be volodymyr10 now instead of just volodymyr, and the user should have a new password: newPassword. Let’s send a GET request to http://localhost:8080/users in order to confirm that user’s info was updated: 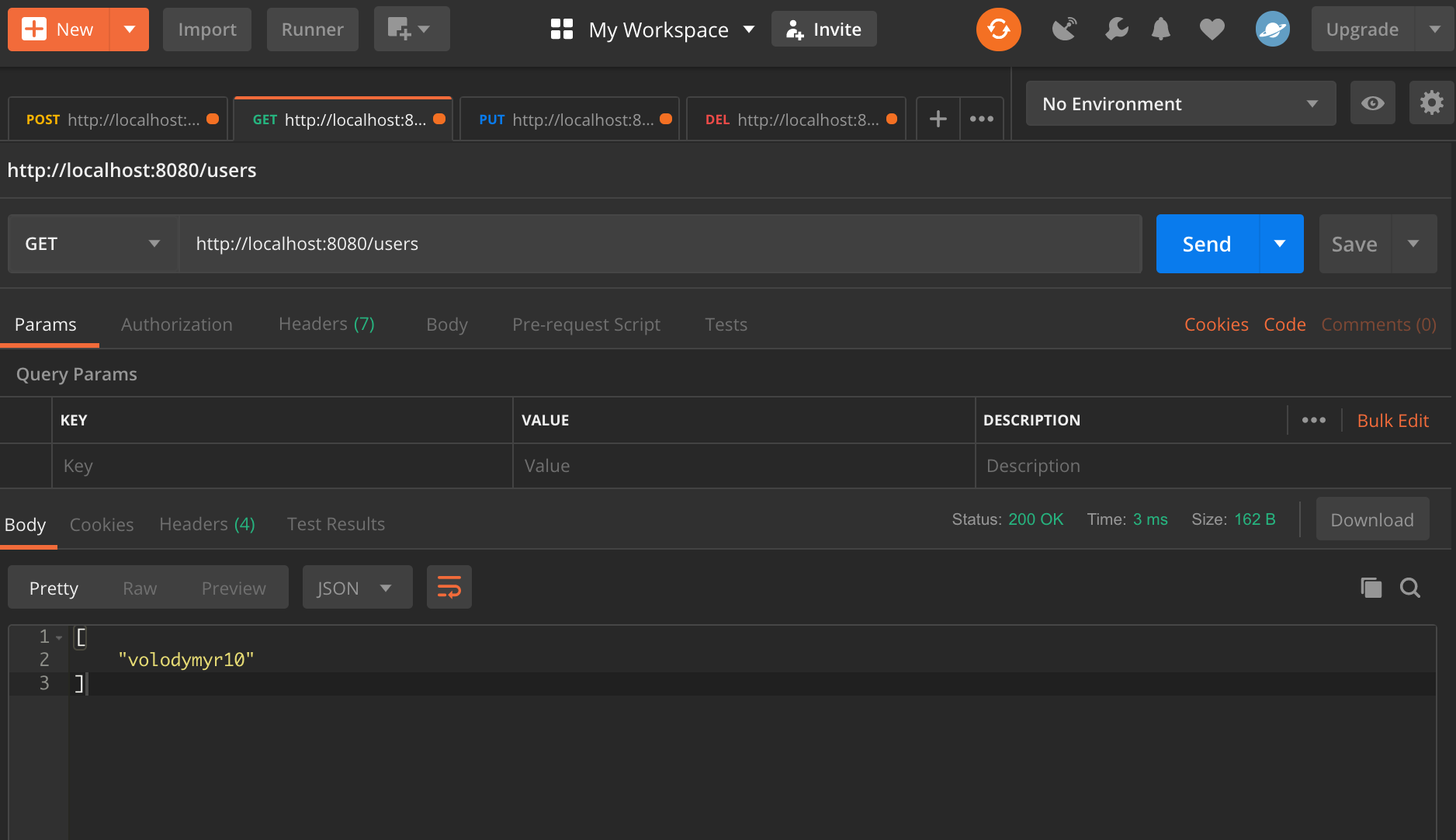 It returned an updated username.

Finally, let’s take a look at how to implement a user deletion endpoint:

This code is almost the same as our router.put function but a little bit simpler. Here, I read user's id from the request’s parameter and assign it to userId variable. Then, I create the client, collection, and query variables in exactly the same way as I did in the previous endpoint.

Lastly, I call collection.deleteOne with the query I’ve made. It will look for a document that has that user id and delete it from the database.

Time to test it! First, I want to add some more users to the database. I’ve sent a couple of POST requests with the new users, and here is a new list of users: 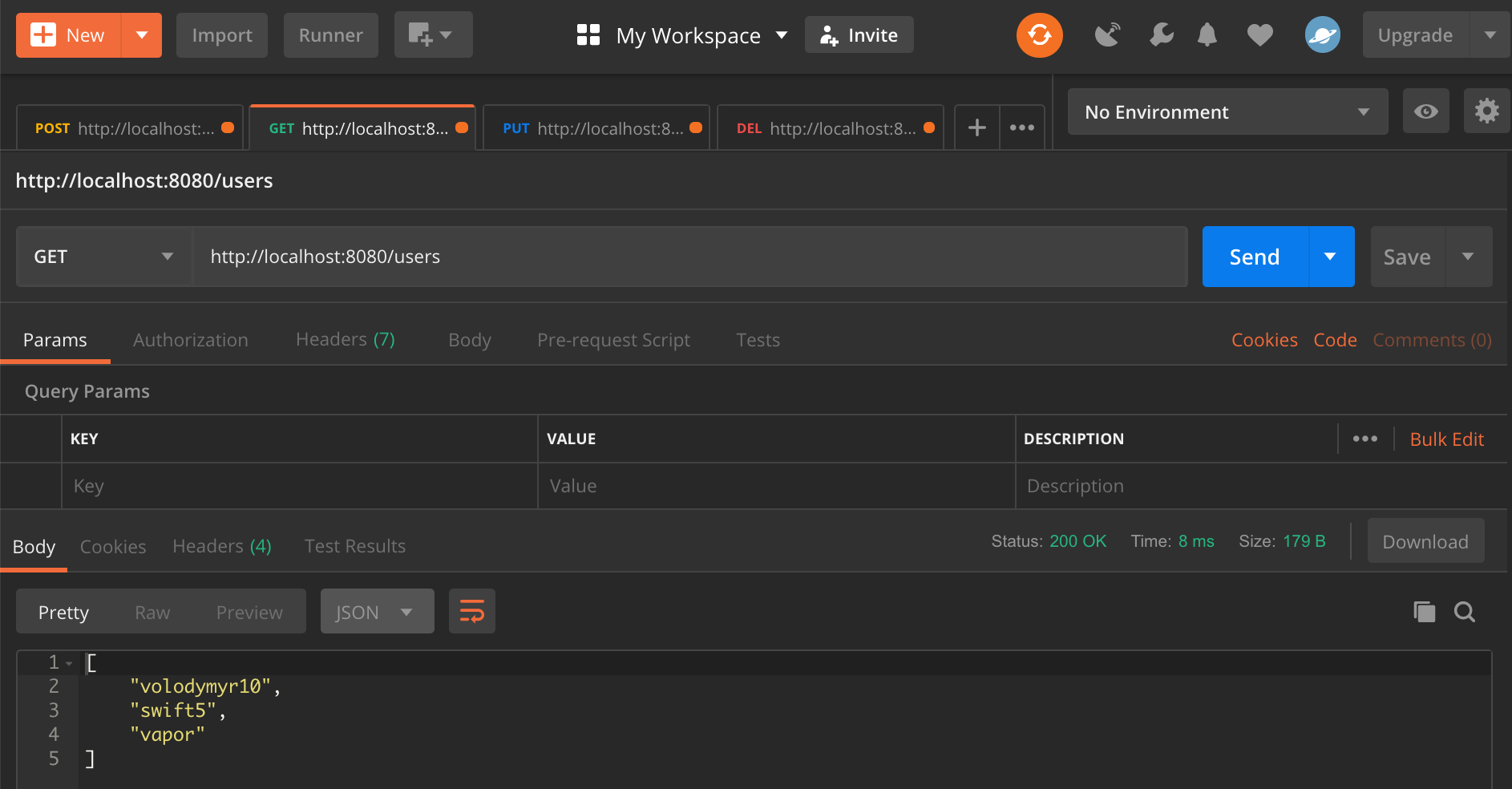 I got a successful response with status 200 (see the bottom right corner). Let’s see the list of users now: 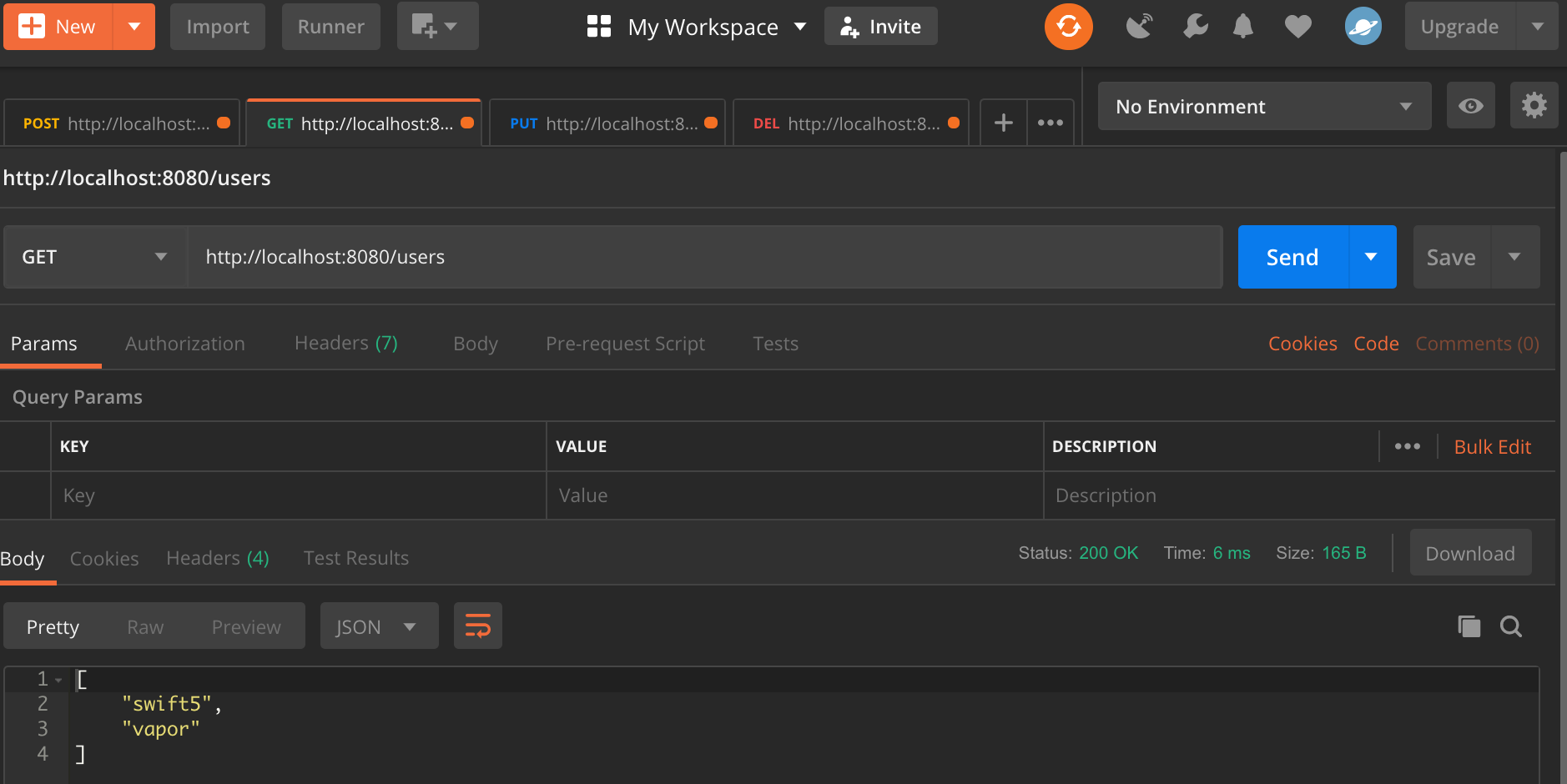